The aim of this section is to try and give you a picture of how the world will change through the effects of global warming. There are global consequences from the changing weather patterns, and other associated impacts. What will these mean to you and me? I focus right in on changes we can expect to see in my home town of Reading to help illustrate what climate change will be like. From this you can hopefully get a feel for how much things will change in other parts of the world. Notice that it will make a big difference to the future if we cut down on our emissions now! 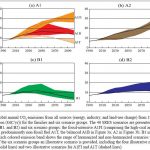 The greatest source of uncertainty for anyone trying to predict how the climate will change is us. How will we behave in the future? Will we take the issue seriously and rapidly cut our emissions of greenhouse gases? Or will it be business as usual? There are a number of Emission Scenarios, which have been modelled to try and understand this. This section has been updated to include the new AR5 scenarios. 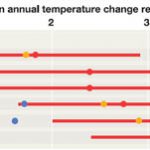 How will global temperatures change?  1 December 2010

Atmospheric scientists use the emission scenarios to predict how much greenhouse gas concentrations will increase in the atmosphere. They can then run Global Climate Models to predict how the temperatures will change in the future, alongside changes in other aspects of the weather like rainfall. Even medium emission scenarios predict increases in average global temperatures by 3ºC, by the end of the century.

But what does it mean for me?

Talking about how global average temperatures might change is all a bit academic. It doesn’t tell me how my local climate is predicted to change, and that is what I really want to know to try and understand what global warming is going to mean for me…and you… 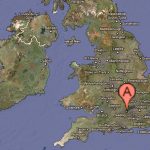 To understand how climate change is going to effect me, I need to be clear to define: where (Reading, UK) and when (March & August, 2050 & 2080); and which future emission scenarios (the highest & lowest) I am interested in. Fortunately I will then be able to use the new UK climate projections to give me some detailed data on how big these changes are likely to be…and I need to be clear about what I mean by the word “likely” (the middle, 67% probability band).

This is an in-depth look at how the UK climate projections (2009) can be used to understand how climate change will effect temperatures, for me, in the month of March. I introduce you to some real temperature data from the University of Reading Atmospheric Observatory, to help visualise what day-to-day temperatures might be like. And it seems likely that, even by the 2050s, and even under lower emission scenarios, we will see March temperatures that are more like the averages that we are used to seeing for April.

Even by 2050 we could experience heat waves, with hottest day temperatures that reach 40ºC in the shade. By the 2080s there is a big difference in the temperatures that we are likely to see by following the high, rather than the low scenario. It looks like it could get uncomfortably hot compared to what we’ve been used to. 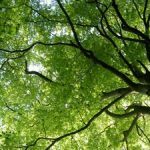 There is a significant amount of difference expected between the individual seasons, which you cannot understand from the crude estimates of change to average annual temperature. In Reading, we will see summer temperatures increasing more relative to the rest of the year, although it will be milder in all seasons. It looks like winter will be wetter and summer will be drier: there is more uncertainty about how rainfall will change for spring and autumn.

What are the likely consequences of these changes to our climate?

The changes to temperature, rainfall and other weather variables will cause changes to the environment around Reading. We might see increases in flooding; more extreme heat waves; loss of some species (e.g. birds and trees) and the rise of others…potentially including pests. 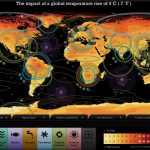 What are the consequences of these changes?

To help us understand how climate change will vary across the world, the Met Office have created a map showing the relative change in temperature across the globe. It is notable that other parts of the world are expected to see much bigger changes than Reading. This map also identifies some of the key consequences that individual regions may be expected to have to deal with. These are listed further with links to the IPCC impacts report.

Knock on effects for Reading

It is fair to point out that Reading isn’t the centre of the Universe(!) and that we don’t live in isolation. Climate change effects in other parts of the world will be different, and may be more or less extreme. Hopefully, it is clear to see that knock on effects of following anything like the high emissions scenario will be completely unacceptable. We must fight hard to reduce our emissions so that we are not left with trying to adapt to some dangerous consequences of climate change. 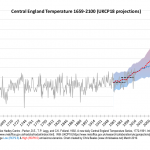 This is a graph that I have shown many, many times over the last few years. It is something I created to illustrate the scale of climate change, and how it will affect us in England. 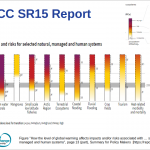 The IPCC SR15 was released on 8 October 2018 with the strong messages that we have only 12 years to limit global warming to 1.5 degC. 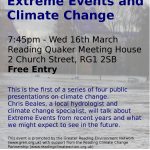 The aim of the presentation is to help explain the link between Extreme Events, which can dramatically affect our lives, and Climate Change, which may seem less urgent and is often talked about as rather abstract changes in global average temperatures.

The greatest source of uncertainty for anyone trying to predict how the climate will change is us. How will we behave in the future? Will we take the issue seriously and rapidly cut our emissions of greenhouse gases? Or will it be business as usual? There are a number of Emission Scenarios, which have been modelled to try and understand this. This section has been updated to include the new AR5 scenarios.